Yesterday Microsoft announced general availability for the new G-series Azure VM’s. Those are some powerful machines with up to 32 CPU cores and 448 GB RAM (!) – you can see all the sizes here: 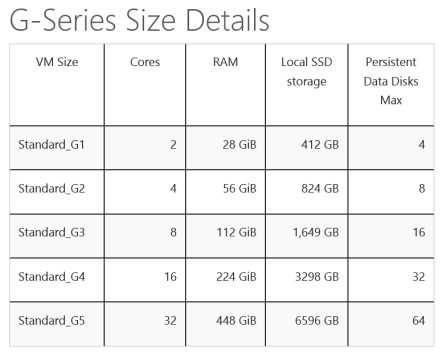 They’ve even replaced the normal AMD CPU’s with Intel Xeon E3 v5 processors, which is noticeably faster. You can read more here: http://azure.microsoft.com/blog/2015/01/08/largest-vm-in-the-cloud/

So, now we shouldn’t be limited on the performance anymore, right? Not exactly correct. While Microsoft promotes these servers as blistering fast, with SSD storage and all, notice that the SSD storage is local, which means it’s only used for caching and the non-persistent temp drive Azure VM’s have. This is really cool for SQL features like Buffer Pool Extension, but not THAT big a deal in my opinion. Looking here, we’ll notice that data disks are still limited to 500 IOPS per disk, and here lies the biggest performance limit in Azure at the moment. We can however add up to 64 disks per VM on these monster machines, so we can achieve higher IOPS overall.

For a disk performance test of these new VM’s, Marius Sandbu already did one: https://msandbu.wordpress.com/2015/01/08/azure-g-series-released-and-tested/

So when can we expect better disk performance? Well, Microsoft recently announced the preview for Premium Storage. If you haven’t heard, Premium Storage will finally remove the 500 IOPS/disk limit, with up to 5.000 IOPS and 200 MB/s throughput per disk, and 50.000 IOPS/VM:

Only problem is that this is currently a quite limited (private) preview.. I’ve requested access through all the channels I have, but haven’t heard anything yet. My guess is that it’ll be a public preview within a few months, and hopefully GA in second half of 2015. Until then we’ll just have to wait and start using the G-series, which btw is only available in West US region as of now, but should be available in other regions soon.